It all started in 1998 with our foundation bitch, which we named so lovingly after our favorite singer at the time-“Seger”.

Seger was a sweet dog with a face like a puppy until even her last days. She graced us with many wonderful companions for others as well as ourselves. We kept a pup from her first litter and named her “Segers Golden Bullet CD”, call name “Emma”.

Emma lived for 14 years and was obedient even to her death. She was the BEST! She was my first dog to achieve getting an Obedience title with a Therapy Dog title as well. 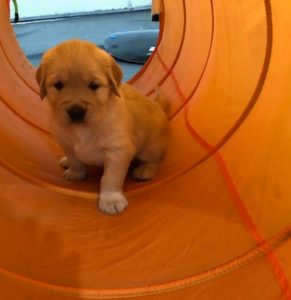 Seger also was accredited towards having a Therapy dog title. The dogs traveled everywhere with us , vacations, the vet clinic with me every day, visited nursing homes, hospitals, schools and play yards as well as many dog classes and shows.

Since Seger and Emma, there have been many others owned and co-owned.

We now have in our family, past and present,

“Windy” (Golden Acres Against the Wind)

“Ember”(Golden Acres The Fire Inside)